For all intents and purposes, you are reminded that MIMCO Asset Management is a subsidiary of the MIMCO Capital group and that they are two different entities.

MIMCO Capital is a non-regulated company under Luxembourg law which offers the investment solutions Mercureim EF1, Everest One, BUILDIM 19 and OCITY. Its funds are reserved exclusively for professional investors within the meaning of Directive 2014/65/EU - MiFID II. MIMCO Asset Management was born from the development of MIMCO Capital in France. It is a management company under French law regulated by the AMF under the approval number GP-21000018, which manages the MIMCO Grand-Ducal and MIMCO Revitalize funds. By reference to article L. 214-144 of the Monetary and Financial Code, its current and future funds are exclusively reserved for professional and professional-like investors in France who meet the conditions of Article 423-27-1 of the AMF's General Regulations, i.e. those likely to invest at least EUR 100.000.

The entire contents of this website are provided for informational purposes only and do not constitute an offer or recommendation to buy or sell any financial products or services, or a promise to undertake or solicit any activity, and should not be relied upon in connection with any offer or sale of financial products or services. The information on this site is copyrighted and all rights are reserved. It may not be reproduced, copied or redistributed in whole or in part.

By clicking "Continue", you confirm to MIMCO Capital that you are accessing this site as a professional investor with the knowledge and skills necessary to evaluate the risks associated with investing in financial products and that your use of this site does not violate any applicable laws or regulations.

Luxembourg ranks 2nd highest average annual salary in the world with USD 65.449 in 2018 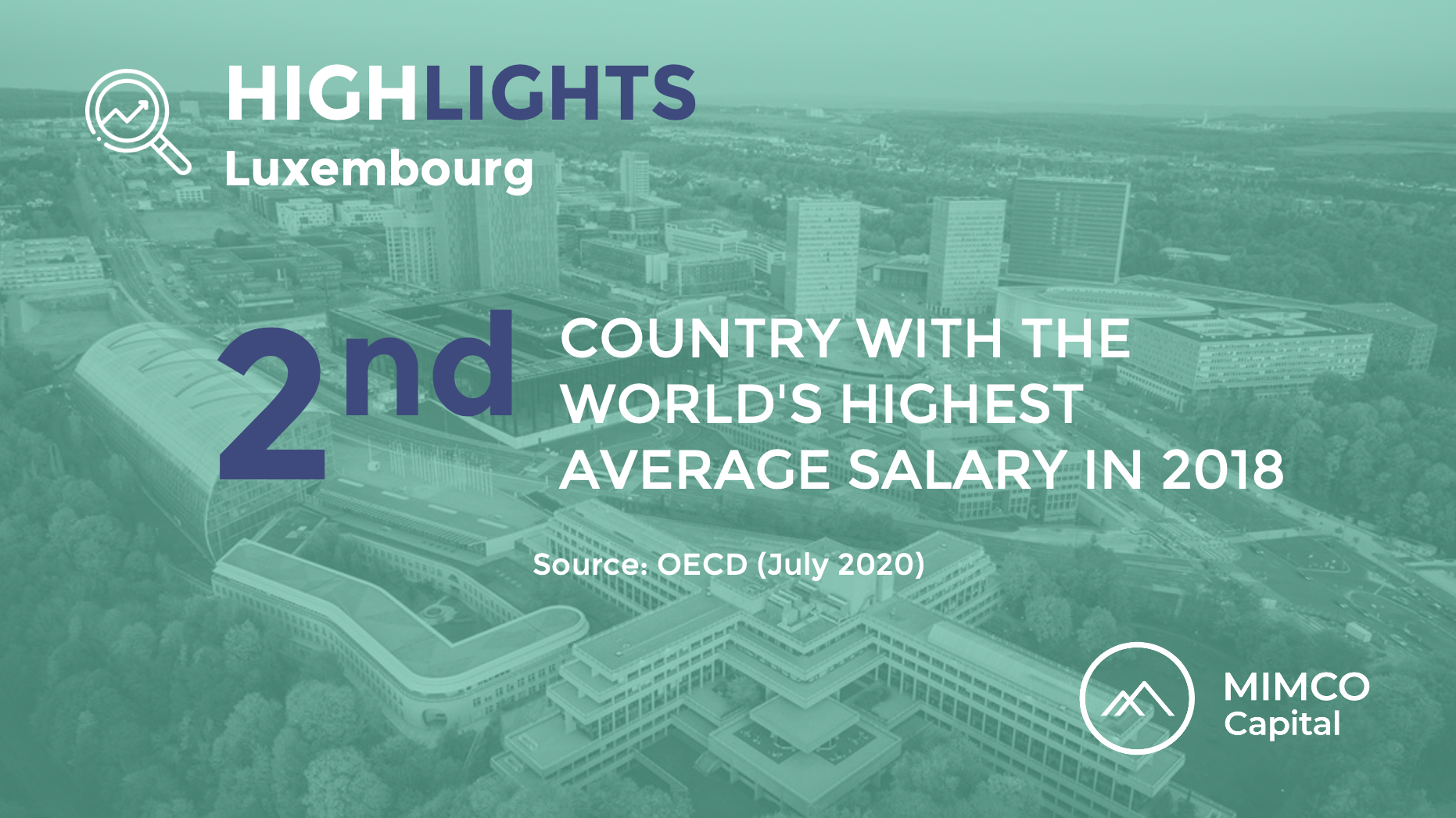 According to Serge Allegrezza, PhD in applied economic sciences and director of STATEC, "in Luxembourg, the average salary is mainly driven upwards by the financial sector, where the added value created per employee is particularly high. The players in the financial sector are therefore in a position to redistribute more easily the wealth created through remuneration".

Another not insignificant factor is the biennial indexation of Luxembourg's minimum social wage to the evolution of prices and the average wage, which today makes it one of the highest in Europe, whereas in 1985 it was lower than the Belgian minimum wage and comparable to the French minimum wage, according to the Idea Foundation.

Luxembourg's attractiveness in terms of remuneration can also be explained by the need for companies to maintain their level of growth by calling on foreign workers, whether they are frontier workers or expatriates. Their decision to move to the Grand Duchy or nearby is largely due to the convincing salaries offered.

However, while the high average annual salary is a definite factor in Luxembourg's attractiveness, it conceals many disparities depending on the branch of activity in which the employee operates, his level of education, his place in the hierarchy, his age and seniority, or even gender.

Thus, STATEC indicates that despite its high level, the average salary in Luxembourg has stagnated since 2015, as Luxembourg has been encountering problems of productivity for several years now, which is growing more slowly than elsewhere. The wage increases that have followed are therefore mainly linked to the automatic indexation of wages and the situation on the labour market.

In general, moreover, there are wide variations in wages across sectors, with the highest average annual wage for a full-time equivalent observed being in the financial and insurance sector, followed by education, professional, scientific and technical activities and public administration. In contrast, the sectors with the lowest average annual wages are hotels and restaurants, administrative and support service activities, construction and trade.

In terms of gender equality, Luxembourg is particularly good in terms of developments enabling women to invest more in their professional careers. According to the latest study by the European Institute for Gender Equality (EIGE), the pay gap between men and women is 5,5% when the European average is 16%.

Last but not least, the wage disparities mentioned and related to the cost of living tend to put some people at a higher risk of poverty. According to STATEC, in 2018, after deduction of taxes, the median disposable income per household is only 5.028 euros per month when 4.215 euros are needed each month to live decently in Luxembourg for a family with two children. However, in 2018, in Luxembourg, 18,3% of individuals, i.e. 105.620 people, were at risk of poverty with a standard of living below 2.013 euros per month, an amount corresponding to the poverty threshold defined today.

Social transfers to households (compensation for old age, sickness, unemployment, etc.) remain an effective tool to reduce the risk of poverty but while Luxembourg's standard of living is the highest in Europe, its at-risk-of-poverty rate of 18,7% is 16,9% above the EU average.